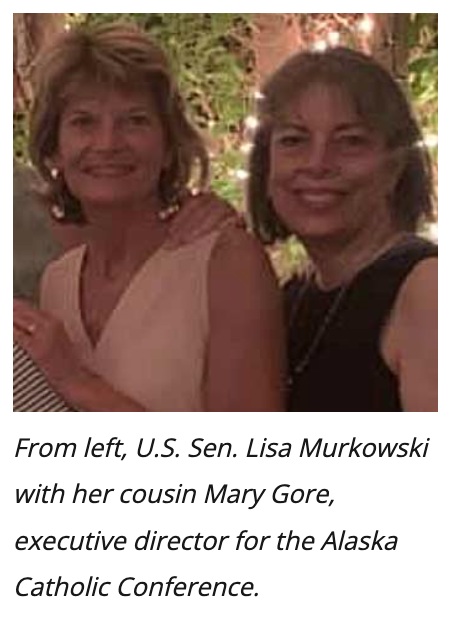 Our Mother, who art in heaven, hallowed be thy name. Thy “KINDom” come, thy will be done…

Alright I’ll stop butchering the Lord’s Prayer. It was as painful to write as it might have been for you to read but I’m trying to make a point. Deception prowls about like a lion seeking to devour, and we need to see it, call it out and, as Solzhenitsyn noted, “Live not by lies.”

A devout Christian, voting for Lisa Murkowski, is, in my estimation, living by lies. She has embraced the pro-abortion message with vigor and believes that same-sex marriage is as equal and essential as traditional biblical marriage. She is more of an adherent to the doctrines of Planned Parenthood and the LGBTQ movement than to the Catholic Church she claims to be a part of.

Alaskans voting for Murkowski may not know that her first cousin and close friend, Mary Gore, heads up the Alaska Catholic Conference, a church agency representing the Anchorage-Juneau and Fairbanks dioceses to provide for the coordination of the public policy concerns of the church. As executive director of the conference, Gore has carried water for our senior senator for years.

Many Catholic Conferences across the country are standing rock solid in support of fundamental Christian teachings like the sanctity of life and God’s design for marriage as the union of one man and one woman. They are unapologetically and unambiguously calling out Catholic politicians in their respective states who claim membership in the church but oppose its basic moral teachings. Unfortunately, that’s not happening here in Alaska.

Although Gore works for the Alaska bishops, it seems she actually calls the shots – doing everything in her power to prevent the Archdiocese from criticizing her senator cousin. Having worked side by side with other Catholic conference directors across the country, I can say plainly that if Murkowski was a senator in South Dakota or Kansas or Louisiana or even California – think Archbishop Salvatore Cordileone calling out Rep. Nancy Pelosi – Lisa would be on even thinner ice than she is already with Alaska’s electorate.

As Christ followers, we all need to watch for fraud creeping within. I’ve heard the best way to detect a counterfeit bill is to know the original intimately. So it is with the church.

To be sure, there have been enemies within the church since its founding. Saint Paul’s words to Timothy, in what is considered by many to be his last epistle before his death, makes it clear that we should be on watch for wolves in sheep’s clothing. “For the time will come when people will not put up with sound doctrine. Instead, to suit their own desires, they will gather around them a great number of teachers to say what their itching ears want to hear. They will turn their ears away from the truth and turn aside to myths.”

Although Lucifer has been fine tuning his craft from the start with fallen angels, as a Garden serpent and tempting Christ in the desert, his tactics are current and salient today. Whether it is worse now than prior times, I don’t have much interest in pondering, but we are pressed upon from every direction today. And the One who created the universe desires that we remain on guard.

Back to the butchering of the Lord’s Prayer. I recently learned that one of the largest communities within the United Methodist Church left the denomination. Woodlands Methodist Church in Texas, with 14,000-plus members in its congregation, made the decision to disaffiliate with the UMC because the denomination had wandered from sound doctrine. As their senior pastor said, it is much more than the LGBTQIA agenda and all they are doing to rid the church of its essential teachings on human sexuality.

Many within the UMC are opposed to referring to God as Father (too patriarchal) and even opposed words like Kingdom (same reason), which they replace it with “KINDom” in a never-ending battle to be culturally relevant.

I have found the same pattern within churches that affirm progressive, modern notions that they have a right to end pre-born life, or that they can choose their gender/sex. At the same time, they want to cling to traditional, foundational systems that have deep, deep roots. The tension inevitably creates a break. In many, if not most cases today, the break means that biblically sound, “conservative” viewpoints are maligned and replaced with new thinking – new theology.

Socialist Marxist philosophy, Critical Race Theory and gender ideology have not only slithered into the corporate, academic, political, Big Tech, and media universes – they’ve been making frontal assaults on the Body of Christ and its churches for some time. But remember, Karl Marx, with his father’s guidance, hated God. “The first requisite for the happiness of the people,” he noted, “is the abolition of religion.” Critical Race Theory proponents and in turn Black Lives Matter founders have unapologetically embraced Marxism and its tenets. Gender ideology sells the notion that you create your own reality – if you can think it, you can be it. These ideas are incompatible with sound Christian doctrine. People open to such ideas are turning from the truth and reaching toward myths.

Paul’s writing to Timothy is not an ancient relic, but essential food for our spirits in this time – for this election. Don’t try to find a teacher who tells you what you want to hear. Be bold enough to return to the words Christ himself left for us thousands of years ago.

The Church of Jesus Christ and its teaching on human worth, human sexuality, marriage and personal dignity of every life (born or preborn, productive or disabled) is essential. Vote like you believe it.