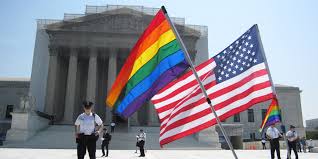 “Today’s Supreme Court ruling on the definition of marriage trampled upon every stitch in the fabric of American democracy.  Despite the will of tens of millions of Americans in 31 states who voted to define marriage as between one man and one woman, the Supreme Court has violated the sacred trust of the American people by undoing the majority-approved, millennia-old institution, opening the door to further unknown change and ambiguity.

This egregious judicial overreach is cause for great concern, both at a federal and a state level.  Such a blatant disregard for the religious liberties of Americans also signals a major change in America’s political discourse: that our government may very well force Americans — especially people of faith — to celebrate and/or participate in activities that violate their conscience and could even restrict their rights to speak freely on issues that are important to them.

Redefining marriage redefines parenthood.  This new definition of ‘marriage’ further weakens the institution by making it more about the desires of adults than the needs of children.  While many scientific studies have proven that children who grow up in an optimal family environment are more likely to succeed and less likely to be incarcerated, the federal government has placed its stamp of approval on an environment that deprives children of the intrinsic benefits of being raised by a married mother and father.

Perhaps most concerning, however, is the Supreme Court’s inability to interpret policy and doctrine on proven scientific merit and natural law, void of cultural pressures.  Much like the historic Dred Scott v. Stanford decision, which stated that African-Americans had no right to sue in federal court, the Court was unable to conclude that natural law should be the fundamental basis for their ruling, choosing instead to listen to the loud voices of those in opposition to logical and natural conclusions, changing the course of history in the process.

While we are extremely disappointed by this unprecedented and successful attempt by the Supreme Court to circumvent the will of the American people, we will continue to work to ensure that no government — at any level — is ever able to penalize or discriminate against a citizen or institution because they believe in the natural and sacred institution of marriage.

Much as the Roe v. Wade decision awakened pro-life Americans, we expect this ruling will re-energize efforts to promote the sacred institution of marriage, as well as free speech protections for the tens of millions of Americans who simply cannot reconcile this decision with their sincerely-held beliefs.”

To schedule and interview with Jim Minnery, or with questions, please contact Zachary Freeman, at(907) 317-1343 or zach@akfamily.org.

Ken Breivik loves the quote from Charles Spurgeon that says "The Word of God is like a lion. You don’t have to defend a lion. All you have to do is let the lion loose, and the lion will defend itself.”As National Executive Director of School Minis...
23 2    View on Facebook